Tighter than a Scotsman on a spending spree 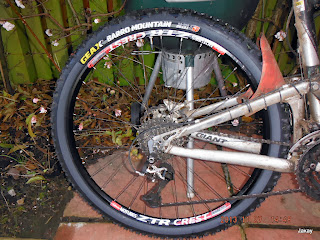 After the problems with the rear Nobby Nics and their sidewall issues it was back to the drawing board, or should it have been the Internet, for a rear tubeless tyre that was light, tough, and most of all cheap! I settled on a 2.1 Geax which seemed to tick nearly all the boxes, especially the cheap one, and within a day it had arrived. Some of the reviews mentioned difficulties getting them on the rims, talk about difficulties!! I spent several hours and used up all my foul oath vocabulary before I managed to get it on only to discover that I'd managed to damage the tubeless tape with careless use of a metal tyre lever. And I managed to break my best plastic lever into the bargain (more cursing). Next morning I phoned a small bike shop I heard good things about and asked if he could fit a tight tyre,"bring it in and I'll do it for you " he said confidently. After an hour of wrestling with me helping as well and the tyre blowing off the rim the first time we had it on and pressured, covering his workshop in Stans No Tube sealant by the way, we eventually got it fitted and pressured. It was tested out at Glentress last night and coped well though it does roll a bit on hard cornering, I reckon I'll get used to that though. The end result is, the tyre performs well but it's a complete bitch to fit, so I wont be buying another Geax.........ever!!!!

Why have Schwalbe Nobby Nics got so weak sidewalls? 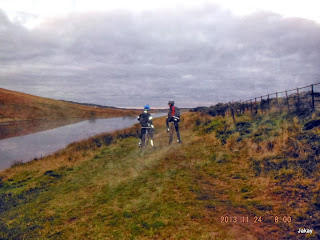 As good a morning as you can get in late November up in the Pentlands.

A terrific mornings riding today in the Pentlands spoilt only by my rear tyre, a Schwalbe Nobby Nic, having not one but two small splits appear on the sidewall. I'd read the reviews on these tyres and stupidly ignored the fact that about 75% of them considered the sidewalls to be very weak. Rather I was taken on by the fact that they were cheap and to be honest they are very good in every other respect. Probably as a front tyre they wont be so prone to splits (we'll see!) but as a rear they're, lets be honest, CRAP! Anyways I had been running it tubeless but had to stick a tube in it to complete the ride today. Apart from that distraction is was a great ride with over 32 miles covered and nearly 3500 feet of climbing, a good bit of training for January's Strathpuffer, but I doubt if the weather will be as agreeable then! 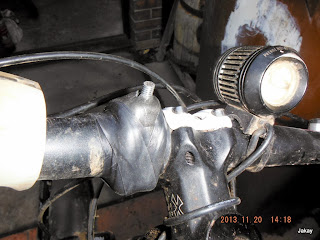 Not very impressive is it? But this insignificant (or is it weird looking) bolt wrapped in self amalgamating tape could be the start of my video making career. Then again, probably not, but the theory is, and it's still to be properly tried out, the camera is screwed onto the bolt which has my unique patent fixing it to the handlebars (ahem) and will be handy for taking the occasional short video of some of my rides. On the other hand if I go over the bars the bolt could cause significant injuries to my person! You takes your choice........ 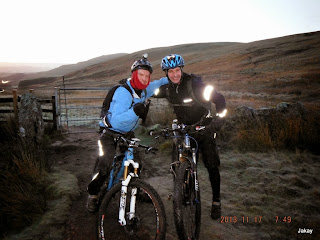 Mark and Baz get up close and personal, well it was quite cold....... 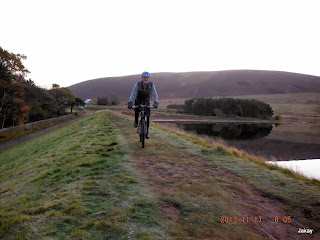 Along the side of Threapmuir Reservoir 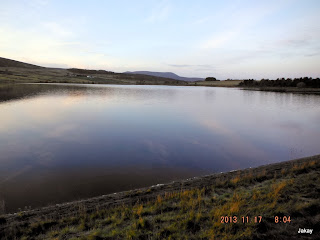 An early morning view over a calm Threapmuir Reservoir, this could all change due to the weather in the next day or two. 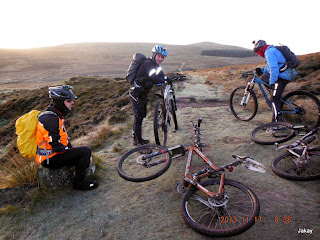 Baz, Clive and me were off from the house at 6am and boy it was chilly, me picking my first thorn up of the new hawthorn hedge cutting season and finding that the tubeless tyres seem to work as after I pulled the thorn out there was a brief hissing of air and then......silence the tyre sealed! Can this be the answer to thorn punctured tyres, I certainly hope so. 6.30 and my phone rings, who the hell is this I think, has her indoors discovered I've  forgotten to switch off the kettle at the plug or some other phobia she has about electricity running amok in our house? No, its Mark, he's decided to surprise us with an early morning visit to join us on the Sunday morning Pentland ride but thought it was a 6.30 start. However he met up with us in about 5 minutes by car and after much abuse about late starts etc. he was ready and the four of us set off up into the hills. For the time of year conditions were really good and the frost in the ground meant that it was reasonably firm as well. Over 28 miles done today and over 2500 feet of climbing and back in the house by 10am in time for sausages, fried eggs and rolls! 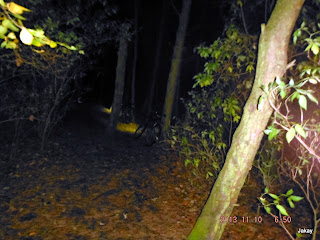 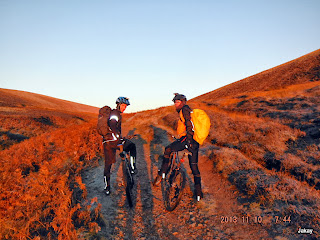 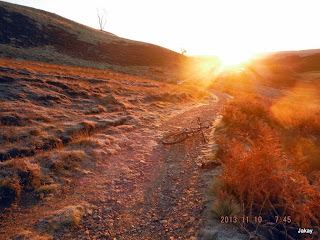 Looking back down Maidens Cleugh at the sunrise, didn't know if this photo would work. 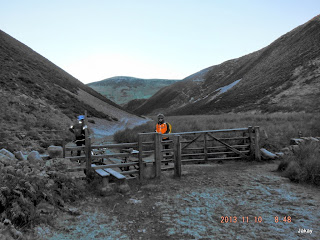 No sun in the valley heading down to the Howe.

Baz copped some penalty points,again, this morning by sleeping in, but give him his due it doesn't happen often and he's not long in arriving. We were off before 6.30am and it was chilly, but last Spring's purchase of the NorthWave Artic boots are coming into their own! Next buy has to be waterproof, and I mean WATERPROOF gloves, I got caught in the rain the other day and my hands were frozen. 25 miles today and the weekly total's rising again!

Now that our entry as a foursome has been accepted for the Strathpuffer, training in earnest begins. As this 24 hour race takes place in the far north of Scotland in the middle of January, getting used to cycling in everything the Scottish winter can throw at you makes sense. So off out this afternoon I went in a temperature that never rose above 3.5 degrees C in a trip up over the Pentlands to be assaulted by first of all a heavy shower of rain and then a face numbing shower of hail. The sun did have the nerve to peep out just before it dipped below the horizon in an ironic display of what I was missing. Next stop will be some wet snow, the type we get in Scotland that chills to the bone......really looking forward to that!
Posted by jakay at 19:24 No comments:

Snow on the distant hills, and Clive makes a welcome return. 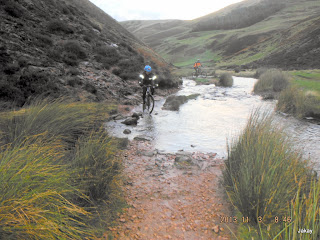 Baz in the front at the water crossing and Clive further back approaching the spot he went over the bars 3 weeks ago! 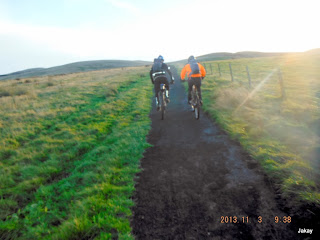 Up towards the 7 steps and the "saddle" at the top of Maidens Descent, and the wind was in our backs for a change.

Off at 6am yesterday morning into a howling gale which thankfully eased off a bit after an hour or so. Clive made a return after a couple of weeks or so absence after coming off and injuring his hand. So what did Baz and I do but take him back up the same part of the track to confront his demons and happy to say (or was it sad, for it would have made a good picture) he made it past his nemesis with no problems. From high up in the Pentlands we could see snow on the top of the Grampians (I think) a sure sign that winters on its way and the summer shoes and gloves wont be out again for a good few months. 25.5 miles and apart from a bit of faffing around with my front "tubeless" wheel which needed a tube (dickhead) there were no mishaps! 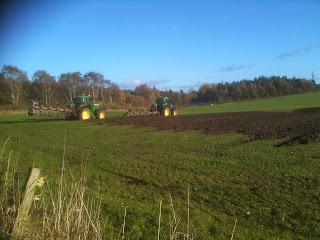 Couldn't resist this picture the other day at how farming has progressed since I was young, perched on an open tractor in wind and rain with a single furrow plough on the back of it!