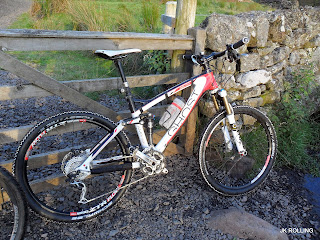 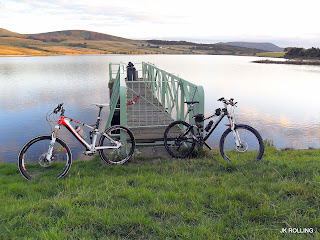 Just Mark and me out tonight, the numbers are dwindling for various reasons, but the weather was good for a change though the ground was wet and greasy from yesterdays torrential rain. Mark had his Ghost back again after a bit of (expensive by the sound of it!) work had been done to it and it was looking good.Sunset is now just after 8pm and the final 3 miles needed the lights switched on, winters not far away.
24 miles done and the training for the Tour de Ben Nevis continues.......

Carlops, West Linton, Romano Bridge, then over the hills to Peebles. 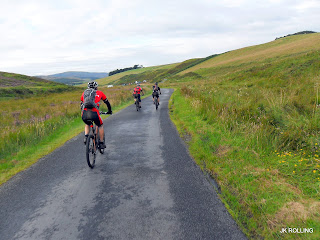 The descent through the Meldons to Peebles. 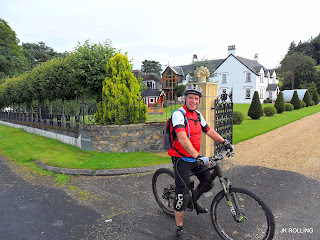 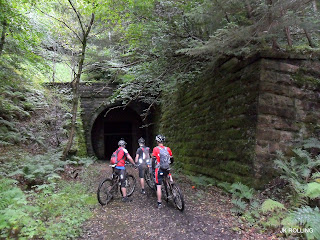 The entrance to the old railway tunnel (suitably spooky).

Away at 6 am (it should have been 5.45 but Clive dithered as usual!!) and arrived at Marks door at Carlops just before 7. From there along the Old Roman Road to West Linton and then on to Romano Bridge (great names for villages) and then up into the hills and the old drove trail over to Peebles. Some of the houses on our route were out of this world, the best one being the one for sale in the photo with Mark. Between us we couldn't quite come up with the collateral to make an offer though. The final run to Peebles was along the old railway line and through the old tunnel, we'd been warned by Mark to bring lights, and the odd bat fluttered (or whatever they do) about us. We bypassed Peebles on the south side along the Tweed and eventually reached Glentress where Mark had the foresight to park a car the night before for the return journey or we wouldn't have got back till god knows when! 37 miles done and a new route, great mornings biking! 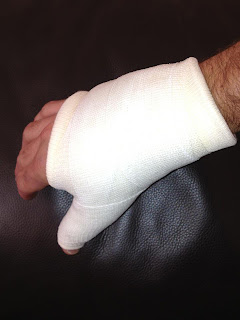 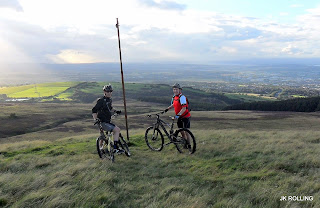 Mark and Roger still going after a near disaster on Sunday 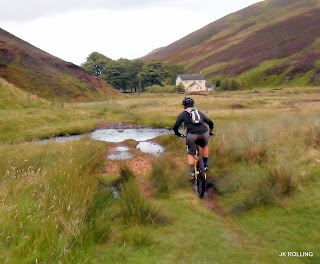 Roger lining up for the "bike wash"

A pretty eventful weekend. With the Tour De Ben Nevis five weeks away Mark had a spectacular crash at Innerleithen and by all accounts a lucky escape from serious injury. According to Roger who was with him , he attempted a pretty technical section without sizing it up first (when did Mark ever do that anyway?) and did an over the bars and full 360 degrees flying sulka (or whatever). He came away with bruises on top of bruises and a shirt fit for the bucket but lived to tell the tale and no doubt do the same thing again!! Dougie on the other hand went out alone on Monday morning and on a bit he's done a hundred times caught a stone somehow, went over the bars and apart from slicing his knee, lacerating his shoulder more disastrously chipped a bone at the base of his thumb! He's going to be touch and go for the event. So last night only three of us were out and we made sure that any time we came off it was on soft muddy bit! 25 miles and no serious offs (makes a change)

Beaten by soggy ground from the previous day's downpour 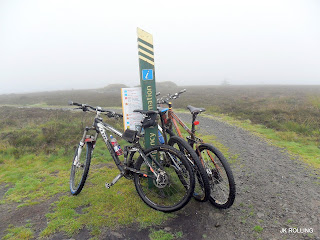 The bikes having a short break at the top of Minch Moor. 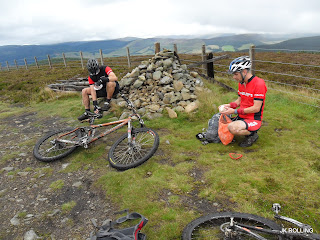 The riders having a short break for sandwiches high in the hills above Peebles!! 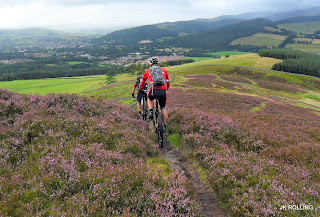 The fantastic descent to Peebles. 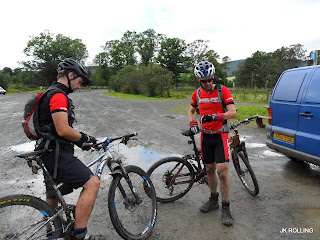 Checking the Garmins at the end of the ride.

The attempt on the Innerleithen-Glentress loop ended in glorious(?) failure on Saturday morning as we cut short the route at Peebles and came back by the back road from Peebles to Innerleithen. The initial climbing to the top of Minch Moor was good as its all on hard singletrack, but after we'd descended to Traquair and left the back road we hit the soft grassy climb and greasy ruts that drained the legs, at least they did mine!! There had obviously been a lot more rain on Friday down there than up in Edinburgh and the climbing was brutal in the soft wet conditions. On the bright side the descent to Peebles down through Gypsy Glen was tremendous though a bit hairy at times on the greasy ground. We got back to the car Park at Innerleithen after about 4.5 hours and to say I was knackered is putting it mildly! However I was out on Sunday and managed to rack up over 40 miles so my recovery aint too bad.....

The look on Marks face says it all!! 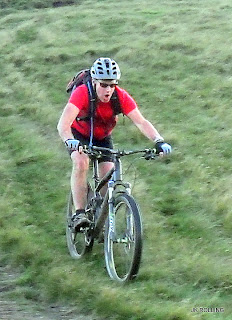 I took this photo of Mark as he came down from West Kip which is a hairy descent to say the least. He did say when he got down that one particular drop off had caused the saddle to whack him in the unmentionables! It was only when the picture was cropped and blown up that the look of pain became quite apparent! 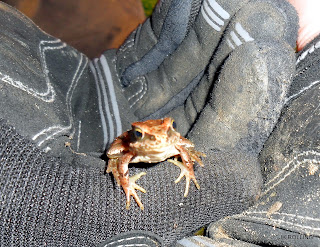 This little chappie seemed pleased to see us 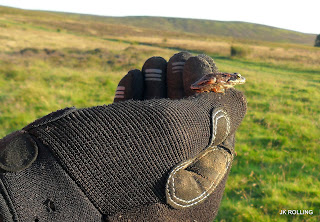 Then he decided to hop it! 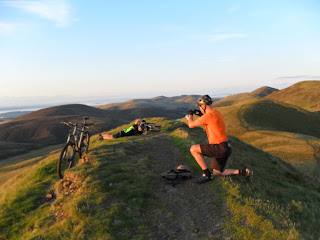 Dougie photographing his bike at the top of West Kip while Baz does a horizontal Mobot in the background! 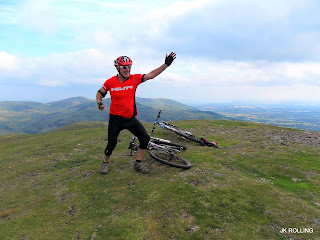 My lame attempt at a Usain Bolt high in the Pentlands!

Baz, Dougie, Mark and me out last night for a West Kip hike a bike, the third time in three days that Baz and me have done it. And, believe it or not the hike a bike up to the top of West Kip does actually get easier the more times you do it, must be physiological, but it's still hard!! The descent from East Kip back down to the Howe is fast, furious and brilliant. Special mention to Mark who's riding a replacement bike at the moment while is own one is in for service, this mighty steed he's on resembles a cross between a JCB digger and a road roller and he's really going to fly once he gets his own bike back! 27.5 miles last night again for the 3rd day running, now for a night off! 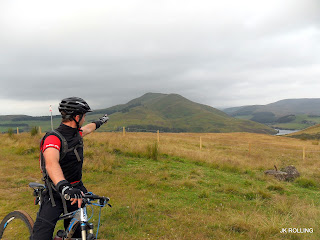 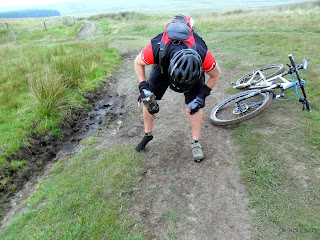 A bit of shoe cleaning out before the "hike a bike"! 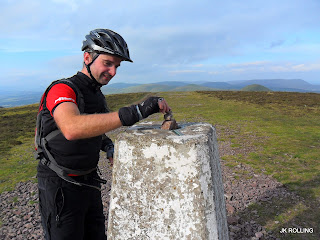 Adding a wee stone to the top of the trig point on Scald Law!

Off just before 6am this morning to ride the "Skyline", the peaks along the Pentland Hills. First of all to warm up we did the Castlelaw Hill climb and then after a bit of acrobatics from me on the descent to Glencorse ( a slow speed over the bars) we set off for West Kip, the first of the five peaks. Baz in great form this morning managed a high percentage of the climbs and on one particularly steep one was stopped by a hill walker. He thought the guy was going to congratulate him on his cycling prowess but instead he was accused of causing untold erosion  on the paths of the hills. These hill walkers, or a large percentage of them at least, seem to think the hills belong to them so he was sent on his way with a few choice words he's probably never heard before. We were gone for roughly 4.5 hours and climbed just short of 4000 feet on our route of 26.5 miles. The training for the Tour de Ben Nevis is now in full flow!

A catalogue of mishaps! 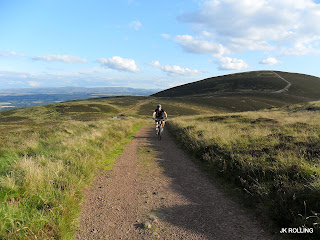 Roger eventually reaches the top of Castlelaw, his troubles had already begun! 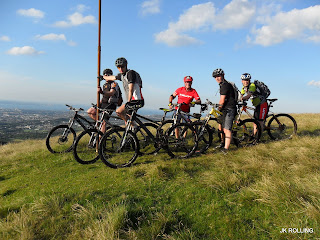 What a cracking night to have so many catastrophes!

After two weeks of very little bike action is was back up  into the hills and the torturous Castlelaw hill climb for starters.There were six of us out and five of us reached the top only to discover Roger was missing. he eventually arrived, his chain had jumped off the cassette  and jammed against the spokes, at least that's what he said! This statement proved to be correct for about ten minutes later his rear derailleur sheared off and brought everybody to a halt, obviously the the first chain incident was connected somehow . The answer to the problem was to shorten the chain and go singlespeed but this took a bit of time and resulted in every midge in Central Scotland being alerted by whatever way midges communicate to the fact that there were six sweaty bikers at a standstill! The midges had a field day and by the time we got going again I swear I could hear midges burping from over eating. Another five or so minutes passed and Clive had a rear blow out. We changed the tube quite quickly, accompanied by more midges, only for the new tube to puncture at the valve before we even got the wheel back on! Eventually Clive got mobile again and decided to head for home rather than tempt fate with no more spare tubes, wise move as it turned out. Roger had gone on ahead on his now singlespeeder and we caught up with him, his legs a blur as he cycled along at no more than 5 mph! On the level bits we were able to give him a push or we'd never have got home before midnight! Coming down the valley to the Howe it was my turn for a puncture, how inevitable was that, but the tube change was fairly quick and I blew it up with a gas canister to get going quickly again. The final straw was a front flat on my bike about a mile from home and with no more gas canisters and nobody else with a pump I decided to run/walk the bike back. However I succumbed to temptation and got the mobile out, phoned Clive and he very kindly (bet he was swearing) came with his pump and with a couple of stop to put some air in we eventually got home, certainly a night to remember, not least for the midgey bites if nothing else!!