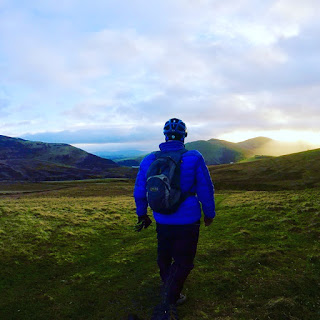 Walking off into the sunset!
Another year and a lot of changes. For a start I'd been threatening to go down the ebike route for ages and finally took the plunge in November when I realised my legs were not keeping me up with Barrie and Dougie and a bit of assistance wouldn't go amiss! Now I find myself wondering whats wrong with the non ebike if I'm out on it, is the rear tyre flat, are the brakes binding? It's opened up a completely new era for me and I can see the mountain biking carrying on for a good few more years yet. So far this winter there's been no significant snowfall or hard frost so December itself has been a good month. A good New Year to anyone who reads this, I intend to keep ebiking for a while yet!

It's the easy bits that catch you out, at least it did with me! 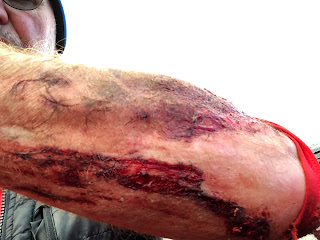 Double ouch! What coming off onto a hard gravel road does to your arm..... 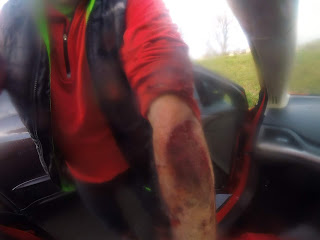 And also to the top of my forearm!

Went right round Glentress no problem until coming back down a gravel fire road I let my attention wander, managed to ride into the muddy, greasy  part at the side and ended up skidding down sideways with the bike on top of me! What's worse my waterproof trousers got ripped as well as a hole in the sleeve of an almost new waterproof jacket. Mind you if I hadn't been wearing them I think a hospital visit would have been called for, as it was, so far I've been able to conceal the injuries from the other half!!

Gypsy Glen by ebike for the first time

Barrie and I have done the Gypsy Glen circuit from Peebles via Innerleithen a few times before but I've never been on an ebike. The climbs a few miles after Innerleithen are brutal and I'm not sure I'd be able to bike up some of them now on a conventional bike so it was a great opportunity to try them on the Trek Powerfly. Barrie was on one of my old Giant Anthems with a 10 speed 11 x 46 rear cassette and a 30 tooth front chainring. He admitted later that he found the low gearing superior to his own Anthems 11 speed 11x 42 with a 32 tooth front chainring. 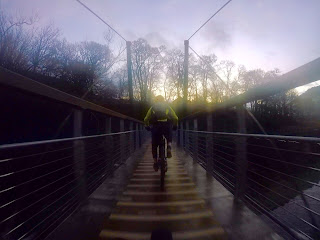 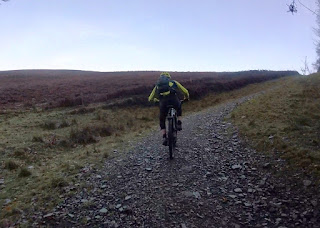 The first really steep climb, and it's a lot steeper than it looks on the photo! 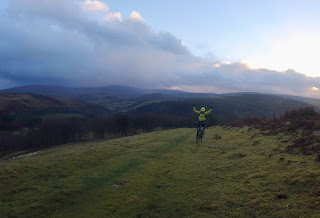 Having conquered another steep grassy climb he feels confident enough to do a bit of showboating, he might come to regret that a bit later on! 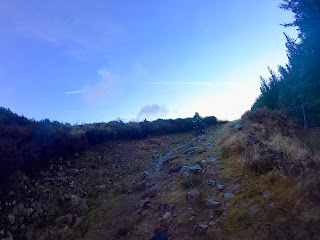 Another tricky little climb picking your way through some loose rocks but at least there's not many more long climbs left. 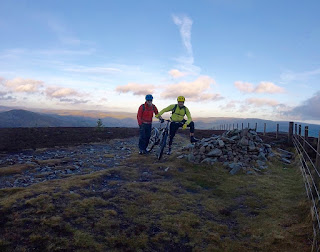 At last we reached the end of the climbing, more or less, and a quick pose for a photo as it was blowing a gale and none too warm! 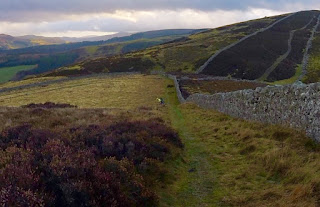 The final short climb was Barries undoing as he stalled on a greasy bit at the top of it and.......see next picture..... 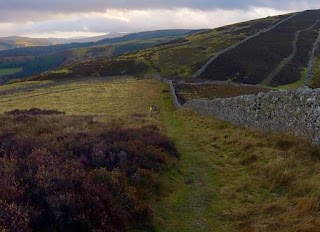 fell off the bike and went rolling back down the slope. If only I'd been a bit nearer it would have been a terrific video!! 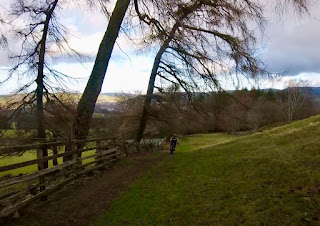 The final fast descent down Gypsy Glen that makes all the previous climbing worthwhile, mind you it was a bit greasy here! 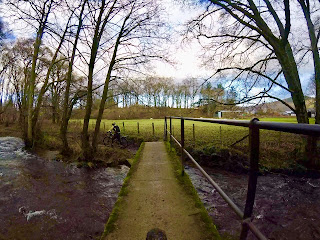 Across the bridge and we're almost back, a terrific mornings bike ride, with a bit of everything thrown in, well worth a trip! 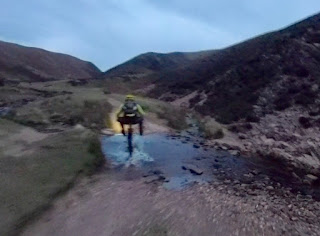 Out on Saturday morning sharpish to avoid the storm that was forecast for later on in the day. The water level had dropped on the water crossing in the last week or so but Barrie still adopted the "legs aloft" method to keep his feet dry as he biked through! 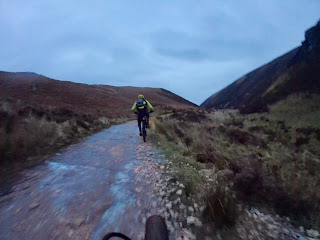 The hard frost overnight had made some of the path quite treacherous and even with 2.8 tyres I managed to come off here (much to Barries amusement) 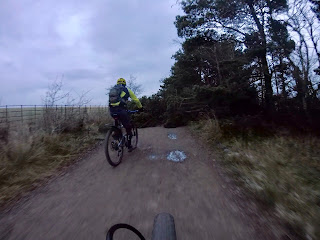 The track alongside Threapmuir Reservoir was blocked by a fallen tree so the wind must have been pretty fierce up here. 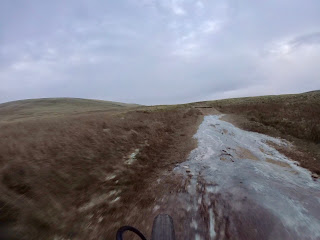 More run ice going up to the Saddle from Harlaw but this time I managed to make it up without coming off. 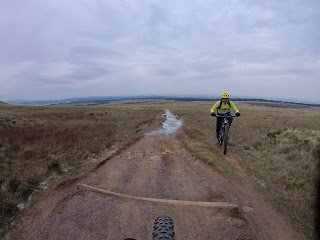 Barrie on his non ebike struggled up into a strong headwind, which in actual fact seemed to be a headwind most of the way round on Saturday!
Another good week of climbs especially on Wednesday when we treated Dougie to a circuit of killer climbs which he did much to Barries disgust as he ended up pushing up some of them! All good Strathpuffer training we reassured Dougie 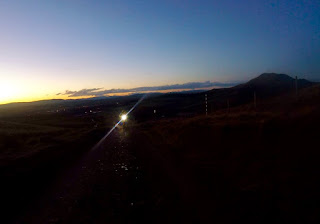 This was obviously before the sun was up but it wasn't going to be long and we wanted to get as far up the hills as possible
. 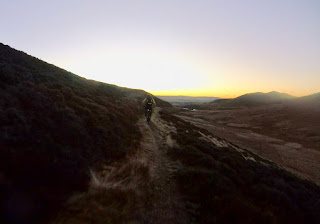 Still climbing and there's not long to go now 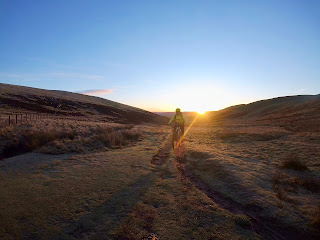 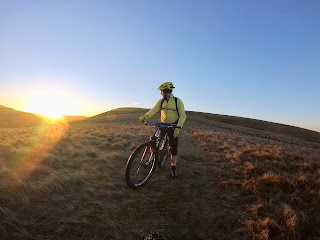 A bit higher up and we catch it again 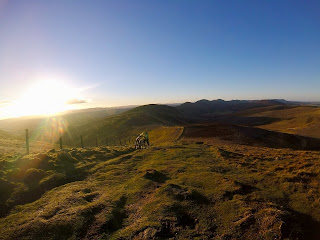 Caught it again and caught Barrie as well having to push up, all these spinning classes still don't help you up the really steep bits! 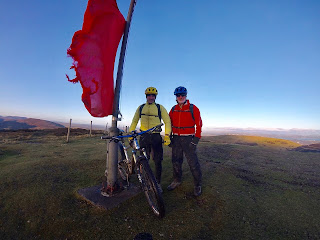 Finally the last climb up to the army's warning flag at the top of Castlelaw.

Over 3800 feet of climbing and hard stuff at that, Barrie's even cancelled his spin class tonight he's so knackered!!

Some hard climbs up the Pentlands...but not on an e-bike! 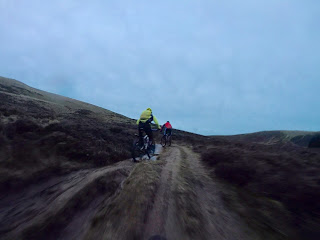 It's just starting to get light 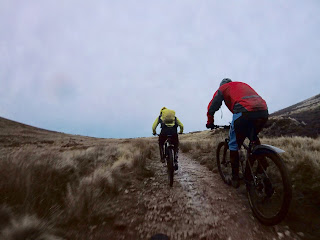 Barrie and Dougie in the slog up Maidens Cleugh 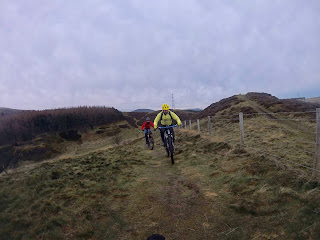 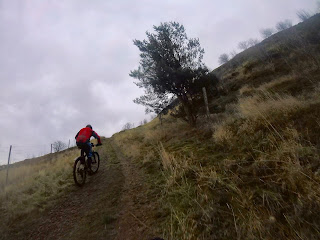 This was the really brutal climb which even on the e-bike meant concentrating to keep the front wheel on the ground, Dougie to his credit managed to make it to the top on his bike. 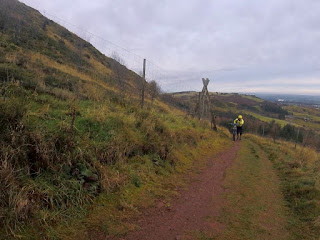 Barrie blamed a hard shift at the gym last night for his failure to stay on the bike...there was absolutely no sympathy for him!! 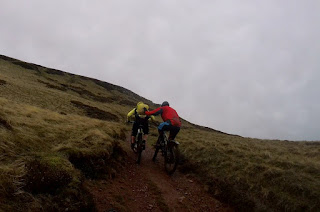 It was hard to say here whether Dougie was pushing Barrie or Barrie was pulling Dougie! 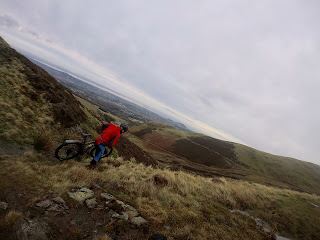 Dougie and I had a coming together resulting in a rare off for Dougie, damn I didn't manage to catch him doing a parachute roll before I could get a picture!

Dougies choice off route today and he decided to torture Barrie as much as he could with a whole raft of brutal climbs, the e-bike can take them in its stride, I shudder to think what I'm going to be like if I go out on the Giant Anthem again, I'm going to miss that response from an electric motor quite badly!!