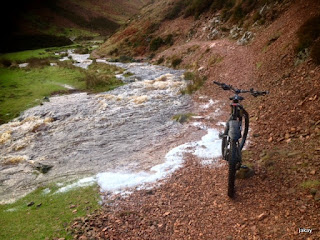 Mid-week and the rain hadn't long stopped pouring down when I took this, it would have been a brave man who tried to cycle over this bit today! The first snowdrops I've seen this year, they looked a bit on the timid side, frightened to show their face! 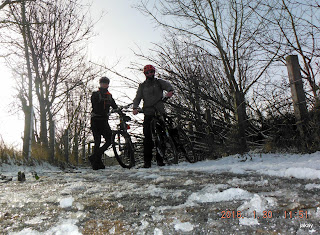 Saturday and the spikers were back out as Clive and I went in search of fallen trees after Storm Gertrude. 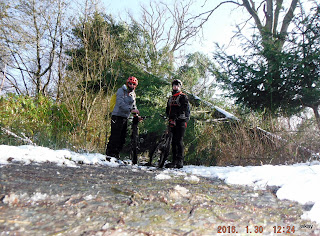 Another bites the dust and it's Storm Henry that's due to hit us on Monday, I'll be glad when we get through the alphabet and it's all over 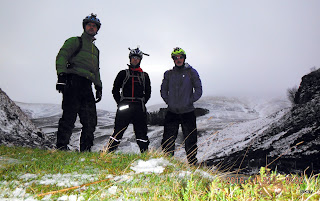 Out this morning for the last ride of the month and pretty miserable weather it was too!

January's over and somehow or other I managed 496 miles off road in what's been the wettest January on record. It's gone from mild and wet to freezing and hellishly wet with the occasional bit of snow and ice flung in to keep us on our toes, bring on February it cant be any worse (maybe!)

From freezing to almost balmy! 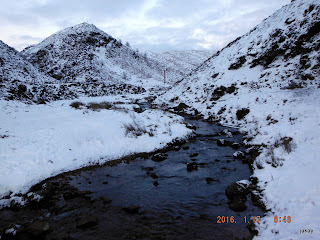 A week ago, everything's frozen solid under a covering of snow and ice spikers were the order of the day. 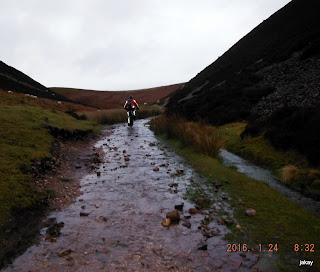 A week later almost exactly to the minute and only slightly further up the valley, the ice and snow have totally disappeared and in its place a stream of water.

What a difference a week makes, from sub zero and ice and snow adding to the fun we're back again to temperatures where I had to take my jacket off this morning to avoid "boil in the bag". Midweek was sheer hell as I slipped and slid on patches of ice and tried to cycle through about 4 or 5 inches of what seemed like soft icing sugar. I arrived back home on Wednesday night quite depressed at how much "hike a biking" I'd had to do to get round our usual winter loop> This morning was totally different, the ice was gone as was the snow and even though the tracks were soft in places and a bit muddy at least I was able to remain upright (well most of the time).
A quick mention to Dougie and Dylan who did the Strathpuffer 24 hour race at the weekend and did a very creditable 20 laps (must be all that Pentland training) ! 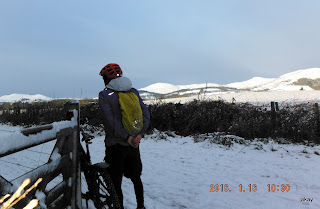 Saturday, and Clive and me are bound for the hills in the background 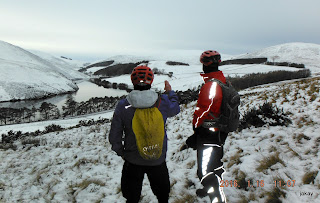 First climb over and it's time to admire the view for a second or so. 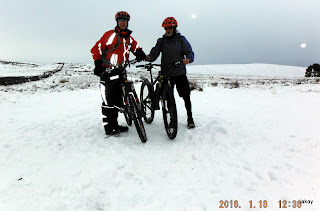 We attempted the climb to West Kip from here but the snow was just too deep and difficult to cycle through so we turned back. 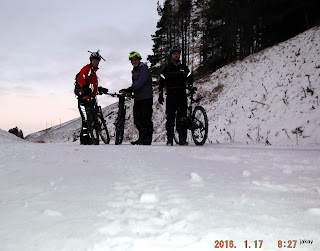 Sunday morning, and a Baz rehabilitation run, and everyone was spiked up, it would have been impossible without them. 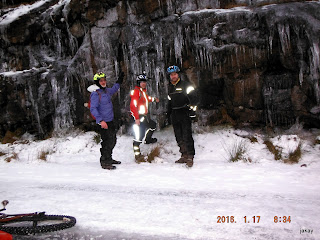 A rocky outcrop with a spectacular display of icicles. 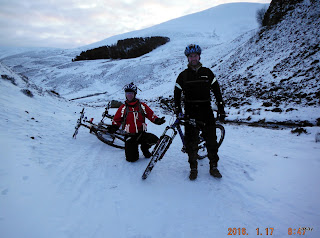 As far a we went on Sunday, Clive appears to be begging for a bit further! 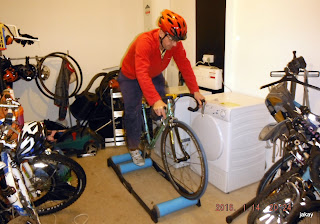 Earlier in the week Clive had another go on his rollers which had ended in disaster the first time he tried and this time to both his and my surprise he was successful!

A good weeks biking nearly all on the spikers due to ground conditions, without them broken bones were a distinct possibility. Mishap of the week was me coming off at near zero speed when my rear derailleur jammed for some reason and I went down like a felled tree. I think I've possibly cracked a rib but in the interests of personal safety and an extreme ear bashing I've kept these details from "her indoors"! Better to suffer in silence than to be reminded frequently of my stupidity biking in adverse conditions. Anyway I've done it before and it heals fairly quickly. 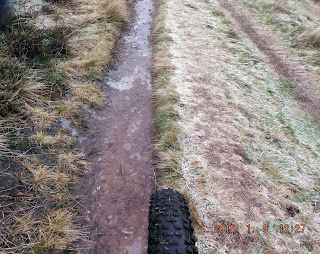 Out without spikers on and feeling a bit nervous as I come across the odd patch of ice! 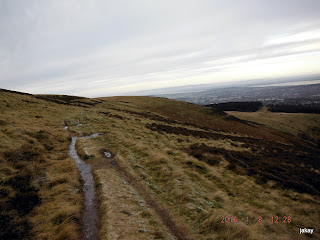 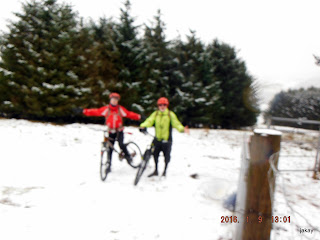 Clive and me out on Saturday this time with the bikes with spikers fitted, and they were needed. 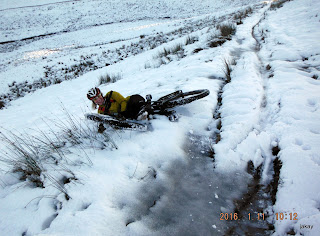 Out with Kathy on Monday and it was tricky going in wet snow with soft greasy ground underneath as demonstrated by her "technical dismount"! 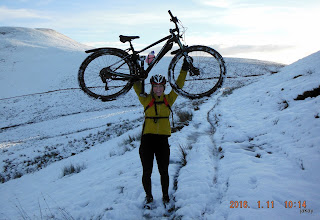 She was unaffected by her off to demonstrate her weight lifting abilities! 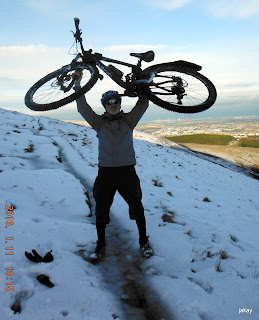 I had to copy this show of strength but was going a bit red in the face as I did!

A week of contrasting ground conditions from firm going with a touch of frost to wet snow and soft underneath to just plain wet and greasy, but Scotland never fails to surprise me with its almost daily change of weather and riding conditions, I don't think I'd honestly enjoy every day being hot and dusty.............well maybe I would when I think a bit more about it!