Just Roger and me tonight as I went for the 9500 mile target on the Trek in the two and a half years since I got it. I needed 22 miles tonight and the prospects didn't look good with the rain getting heavier by the minute and the wind gusting to gale force. But we Scots are a hardy bunch, actually Roger's English, so I'd better say "we British" and we set off up the Pentlands into the teeth of the gale! No actual mishaps tonight, though at one point I was nearly blown backwards by the wind and it was a relief when we turned for home with the wind in our tails. The 22 mile target was reached with a bit to spare so the next target is the magic 10000 miles!
Posted by jakay at 22:43 No comments:

Cant have been much windier than this morning! 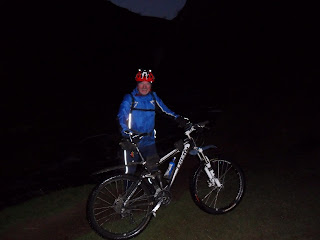 There's actually a waterfall in the darkness at the back of me! 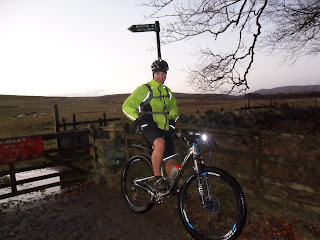 I don't know how Baz can go in shorts with the temperature just above freezing. 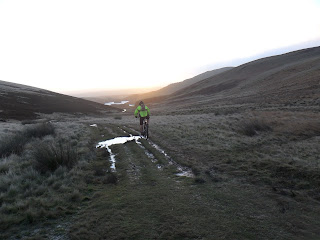 Wet and greasy on the descent to Glencorse. 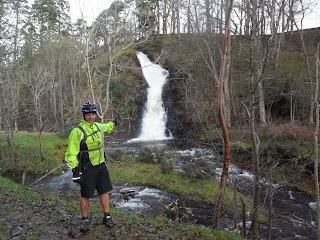 A different waterfall but equally as impressive as the first one!
Wet, windy and generally horrendous weather at 6am this morning when we set off up the Pentlands, we had to stop in the first wooded section to pull a branch that had been blown down off the track. The first hour was the worst with the occasional heavy rain trying to pierce the skin on our faces with the gale force wind, at one point I was nearly blown into a ditch!Why do we do this? Because we're half mad, maybe fully mad, but thats the fun of it, never two rides the same! 25 miles today and a new return bit of single track discovered as well as the waterfall that Baz is pictured beside!
Posted by jakay at 17:26 No comments:

Time for a fork service 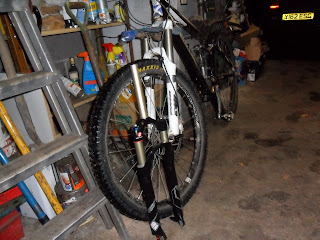 It's time for the Rock Shox Rebas to have a service, in fact it's well past time for them to have a service! However there's no way I'm going to be bikeless over the time they're away so tonight they were removed from the bike and the old Fox's were put back on again. They'll still do a turn for a day or two, though the way the weather forecast is it might be chancing it a bit!
Posted by jakay at 22:16 No comments:

First time for the West Kip loop in the dark (and probably the last!) 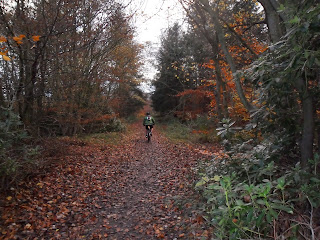 On the way to the Pentlands 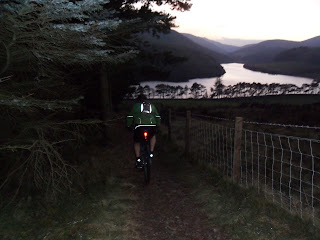 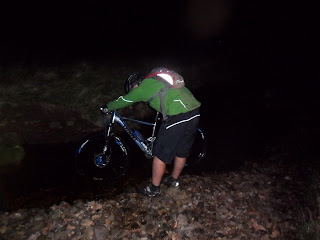 Washing the bike in the burn after the West Kip descent
Baz and I set off at 3.30pm yesterday on an afternoon ride and decided on a West Kip loop which was going to take in a fair bit of route in darkness. It's fair to say that this could well be the last time we do this route this winter as conditions could only be described as slippy and unbelievably muddy. Apart from the muck it was a fantastic ride with the hairy descent to the |Howe in darkness one of the highlights for me. We managed to find a deepish pool in the burn at the bottom of the descent to dip the bikes into, to wash the worst of the muck off them before we cycled home.
Posted by jakay at 09:19 No comments: 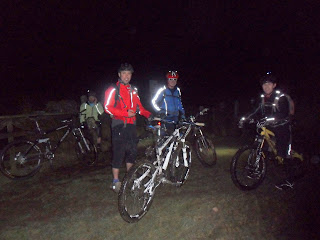 Five of us up the Pentlands tonight, Dougie, Roger, Dylan, Baz and myself for a 24 miler in good conditions for the time of year. One mishap was a front puncture on Dougie's bike, makes a change as its usually me that has them! Another highlight was being passed as the tube was being changed by a couple of topless (males unfortunately) runners. We could only presume they were soldiers from Glencorse barracks out on a toughening up run (or could it have been a punishment run). Anyway it was bloody cold for that sort of nonsense! In the photo Dougie's on the phone arranging to pick up a spare key for his house as he'd locked himself out when we left earlier on!!
Posted by jakay at 23:10 No comments:

What a way to celebrate my birthday! 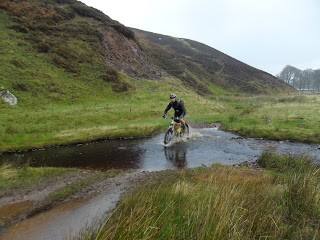 Roger does the river crossing or "bike wash" as its now known! 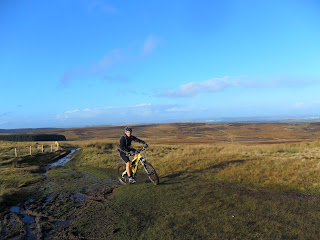 Toiling manfully up the last muddy stretch to West Kip
.
Off out this morning, my birthday, with two mates, Dougie and Roger for a jaunt up the Pentlands with Roger kitted out with his video camera to record me coming off in the mud at some point of the ride! I feel really bad as the only time I did fall off, when a hole in my shorts caught on the nose of the seat as I dismounted, Roger had fallen behind so the moment was lost. It would have been a cracker as I wiped out Dougie and his bike at the same time! The weather made the ride as well, a short rain shower to start with but then clear blue skies later.
Night-time and Clive and me headed back up Castlelaw again for another birthday ride, this time at a more leisurely pace, but we still managed a 15 miler to finish off a good day!
Posted by jakay at 22:08 No comments: 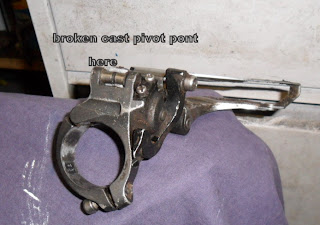 My front chain ring shifting has been decidedly dodgy for a week or two and on Sunday morning it more or less packed in. On inspection I discovered that a pivot pin had worked its way out putting excessive pressure on the main alloy cast pivot point with the result that it had broken. Ever the tight wad I managed to source a Sram X7 front derailleur at about half rrp and after a quick 11.5 miler tonight my front gear changes are back to normal.
Posted by jakay at 21:01 No comments: 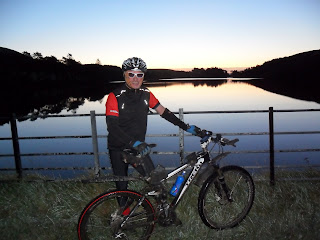 7 am at Glencorse reservoir, calm as a mill pond. 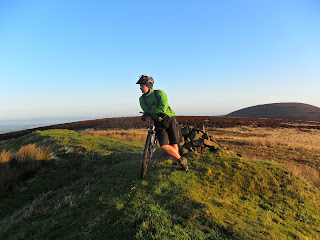 High in the Pentlands. 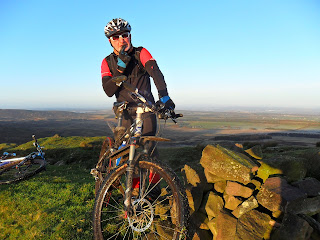 Me in contemplative mood this morning! 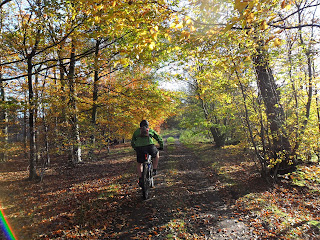 Look at the colour (of the leaves, not Baz's bike!)

6 am start this morning and a nippy one at that with the temperature a couple of degrees below freezing. A quick climb up Castlelaw soon got the heart rate and the sweat going though and once again we did a bit of new track discovery......but not with much success today, the sheep track petered out and we ended up in a bog! By the time we had pushed and pedaled across to the rightful track our back derailleurs and cassettes were full of heather and long rank grass. We'll not be doing that one again!
27.5 miles completed though so a good mornings biking..... blighted by the discovery that my front mech had given up the ghost. Tomorrow night it's into the garage for repair work (ie replacement!)
Posted by jakay at 19:24 No comments: 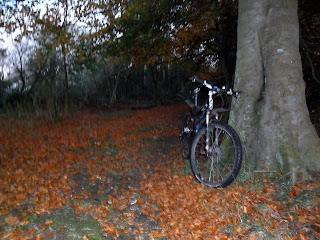 What better way to feel ready for a Mario's fish supper than a quick 11 miler through the woods!
Apparently it's going to be frosty tomorrow morning so that should be interesting.